What is it like to be beaten by a machine? Not a human, or in the case of war, an army or a country, but a machine built by fellow humans. It beats you, takes your crown, and leaves you utterly defeated. Feel bad? I think so. Can the battles be fair or equal? How do we measure fairness and what equates to parity in a battle of human versus machine; they are of course, simply not the same. 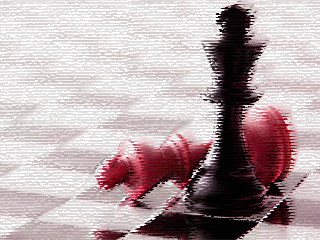 Challenging machines has a long and storied history, from John Henry the African American folk hero’s race against a steam-powered rock-drilling machine in the 1870’s, to Lee Sedol’s 2016 defeat at the ancient game of Go, in Seoul, South Korea, by AlphaGo, an AI built by Google DeepMind.

The story of Garry Kasparov and his chess challenges against IBM go to the very heart of fairness, and highlight that humans and machines are entirely different entities.

Garry Kasparov, Emperor of Chess, youngest World Chess Champion at the age of 22, holding the World Chess Championship title from 1985 to 2000, and considered the world’s best Chess player of all time. He was at the very top of his game when he accepted a challenge to play a machine, and ‘lost’.

There wasn’t just one game, or one computer. This challenge took place over several years (1989-1997). The machines (Deep Thought, Deep Blue, and ‘Deeper’ Blue) used in the challenges could not ‘learn’, as AI machines can today, but became increasingly complex, and powerful as the decade wore on.

The author Daniel King coined the term ‘Deeper’ Blue in the title of his 1997 book ‘Kasparov V Deeper Blue - The Ultimate Man v. Machine Challenge’, as a reference to the rematch. I am using it because of the significant difference between the ’96 and ’97 IBM computers. In the beginning, it was decision-trees and brute force but by the end, real-world Chess strategies such as the Sicilian and the Ruy Lopez were integrated, and human Chess Grand Masters had joined the IBM team.

Chess is an ancient game; it is creativity and intelligence combined, and in the 1980’s and 90’s Chess tournaments were televised, the World Chess Championships were broadcast across UK, Europe, and Asia; it was hugely popular. Newspapers carried Chess columns, and there were many Chess magazines dissecting the game. Chess was part of the public psyche, and at the height of its popularity.

The first IBM-Kasparov challenge was in 1989. Kasparov won against Deep Thought 2-0.

Kasparov undertook many other computer challenges including X3D Fritz (2-2), Deep Junior (3-3) but the ‘Deeper’ Blue 1997 challenge is the only one we really remember, and that is because he, a human being, lost to a machine.

There was so much to lose; Kasparov said he had to win against IBM’s ‘terrible faceless monster’. This was more than a game, this was billed by Newsweek’s 5th May 1997 magazine as the ‘The Brain’s Last Stand’.

The IBM team responsible for the 1997 match said they thought they had broken Kasparov; it was phycological warfare, and brutal. At the final press conference, the IBM PR team told the Deeper Blue team not to smile or look like they enjoyed their win.

The cost of losing to a machine was huge; incalculable damage was done to Kasparov’s reputation, while IBM’s share price increased by 15%. He was angry and felt very badly treated by IBM.

The irony is, it was the psychological warfare, with IBM, the machine, and himself that lost Kasparov the challenge, it was the very difference between a human and a machine that ‘did’ for Kasparov.

It was anger and paranoia that led to Kasparov’s resignation of Game 2, the very emotions that are utterly un-machine. If you read about the Lee Sedol Go challenge there are strong parallels in the way the player responded to playing a machine.

He could not understand his opponent; there were no human traits to decipher, no prior games to analyse. It was revealed later that the game that he had resigned, giving IBM the deciding half point, was in fact a draw that was not immediately realised by either him or the IBM team.

The weight of resigning unnecessarily weighed heavily on Kasparov going into the remaining games.

It was also later revealed that the IBM team programmed fake delays in the game-play to add to the ‘house’ advantage.

So, technically he didn’t lose, but that is a story that will now be hard to tell, and secondly the machine was not his equal in any way. There was, on the other hand, certainly a winner. Big Blue (IBM), turned its fortunes around from failing monolith to bleeding edge modern corporation.

We haven’t had such a newsworthy challenge since Lee Sedol’s Man versus Machine loss in 2016. Have we lost interest in these challenges; or is it that these kinds of grand challenges are so uneven as to be laughable? Or is it that Grand Challenges are just great marketing for tech companies? Do you view Google DeepMind differently now, after Sedol’s defeat?

Spend millions of dollars, hire the best minds, have access to almost limitless computing power, set all the rules and then unleash all of that against a single human being, hmmm... They are not fair fights; they are not telling the real story of progress in the information age. Macho shows of power by big business to enthral us and show us who is the boss; I am not convinced.

So what is the story that needs to be told? Meaningful challenges are much more complex and not as news-worthy, the players are you and me, we play the game every day and Grand Human versus Machine challenges are irrelevant.

Machines consume data, and also importantly, data about data (Meta data); they are insatiable and are consuming the real world to create a digital universe of their own; this is the challenge.

Google, Facebook and Amazon, with their lakes of data and little to no concern for your privacy, this is where the challenge is; millions of decisions, every millisecond, every day, 24 hours a day, deciding your future.

What do we know? Kasparov didn’t lose, IBM won, and there is no option for us to ‘resign’ from the game.

What does Garry Kasparov, the man ‘beaten’ by a machine, say? He changes the challenge, it is not Humans versus Machine, it is a future of Human plus Machine, working together to augment intelligence, to understand decision making, to create mutual advantage, and certainly an end to unequal challenges.

Read Kasparov’s book ‘Deep Thinking: Where Machine Intelligence Ends and Human Creativity Begins’ and see his idea of a future that is equitable and beneficial for all.
ASN:News/Sandbox