This is our problem, are you hearing us?

On the 21st April 2019 an article was published on the BBC News website about a profoundly deaf seven-year-old girl Leia Armitage. 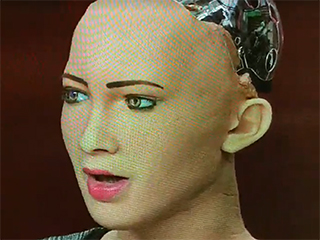 Leia was born with no inner ear or hearing nerve, a hearing aid would be of no use. At the age of two she had cutting edge surgery at Guy's and St Thomas' NHS Foundation Trust (UK), to insert a device directly into her brain to stimulate the hearing pathways.

Along with a microphone and sound processor unit worn on the side of her head she could ‘hear’ and her parents painstakingly taught her sounds and words; eventually she was able to speak.

Re-wiring the brain to fix or enhance a specific capability has been the subject of research for many years, it has also been the stuff of science fiction.

In 1966 Swedish physicist and astrophysicist Hannes Alfvén published his vision for the future in ‘The Tale of the Big Computer’. In it he says “the problem of organising society is so highly complex as to be insoluble by the human brain, or even by many brains working in collaboration”.

His solution, was to issue all humans with a device called the ‘Teletotal’. The fictional device he envisioned was implanted into a nerve channel for a direct connection to the brain.

Alfvén said that “since universal knowledge was stored in the memory units of the computers and was thus easily accessible to one and all, the gap between those who knew and those who did not was closed… and it was quite unnecessary to store any wisdom at all in the human brain”.

Both real and fictional examples bear astonishing similarities but the underlying concepts differ greatly. Leia hears independently, her fix is to restore a sense most humans consider essential.

In Alfvén’s fable the fix is not an intrinsic enhancement of the brain, it is a rewiring in which the brain becomes the receiver or conduit for knowledge, not the source.

Some refer to the brain as wetware so it would make sense to consider ‘knowledge’ as a separate downloadable constituent. Google is already our Teletotal suggests George Dyson in his book Turing’s Cathedral’, he quotes Sergey Brin, Google cofounder, saying “ We want Google to be the third half of your brain”.

He goes on to quote one of Facebook’s founders saying “how much human life can we absorb?”. Do we want to relinquish our intelligence and rely on Google? Do we boldly enter the post Darwin era without asking ourselves what the role of technology and the technologists is?

Well, the problem is we already have. Consider Lulu and Nana (names changed to ensure privacy), Chinese twins born in 2018 who had their genes edited at their IVF conception to remove the CCR5 gene.

CCR5 is needed for HIV to be able to enter human blood cells, it creates a gateway. Dr He Jiankui, referred to this as gene surgery, and considered it a complete success as only the genes he wanted to change had been changed.

He also knew that doing this procedure had a strong chance of enhancing the girls intelligence. Removing CCR5 is known to improve memory and increase intelligence, so what was Dr He Jiankui intention?

He did not reach out to experts to discuss the likely enhancement of the girls’ intelligence as a result of this kind of therapy. This could be considered as an experiment to increase human intelligence, is that OK, where was the girls’ consent?

Where is the line? Who is deciding for us and what will life be like in a world where humans are already being experimented on without their consent. We need to talk, we need to engage everyone in what is coming and what is already here. Where is the discussion, the policy makers, the ethics?

This is our problem, are you hearing us?
ASN:News/Sandbox